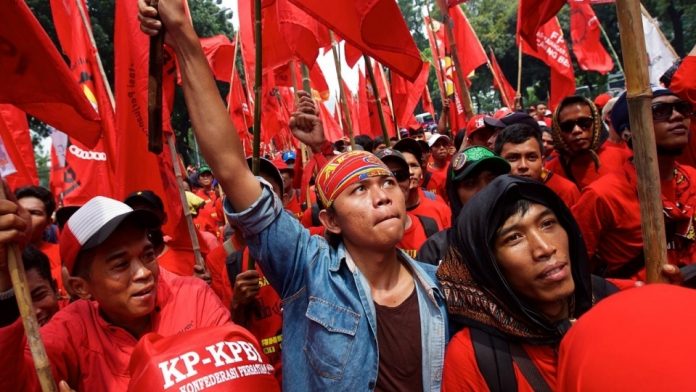 The first of May came back, labors in various parts of the world commemorated May Day in their own way. Since the end of the 19th century, the socialists and communists chose this date as international Labor’s Day. The labors filled May Day with a series of demonstrations, protests, and mass activity. It was a ceremony full of the ideology of resistance against settlement.

As for the labors and workers in various places in Indonesia, the unions have voiced 10 demands on Labor Day on 1 May 2015 which include: (1) To reject low wages by demanding a higher Provincial Minimum Wage by 32 percent; (2) To urge Jokowi-JK government to carry out compulsory labor pension at the beginning of July 2015 with a pension benefit of 60 percent to 75 percent of final salary as civil servants; (3) To urge Jokowi-JK government to increase the budget for health and social security of Rp 30 trillion from the State Budget; (4) To urge the government to immediately remove the outsourcing system, especially in the State-Owned Enterprises; (5) To reject the increase in the price of fuel, LPG, base rate for electricity according to market prices. In addition to the five claims above, they also demanded to: (6) Urge the government to lower the price of basic goods; (7) Put an end to corporate greed; (8) Urge the lifting of rules on vital objects and stop union busting and violence acts against labor activists; (9) Appoint teachers and temporary employees as civil servants without more tests, and (10) Approve the bill on Household Assistant, and revise the law on the protection of migrant workers (Indonesian labors), and revise the whole content of of the law on Industrial Relation Dispute Resolution (Penyelesaian Perselisihan Hubungan Industrial, PPHI).

Eight out of ten of the labors’ demands are directed specifically to the government. Let us weigh several demands from the labors. On the first/main demand, the Government is required to raise the Provincial and District Minimum Wage (UMP/K) by 32 percent. The question is, how can UMP/K be increased while our economy tends to slow down? The indication of the economic slowdown is coming from the statement from the Minister of Finance, Bambang Brojonegoro. The minister’s pessimism is in line with prediction from International Institutions such as the World Bank. If so, then the next question is how should the entrepreneurs (and not the government) meet the demands of raising the UMP/K?

Suryahadi’s research, cited by Aswicahyono in the expert column on this page, clearly showed that “the most benefited party from the minimum wage policy is the white-collar workers”. Minimum wage increases by 10% would lead to increased employment by 10% for white-collar workers. Instead, the hardest hit would go to women workers, young workers, and part-time workers. This is due to the costs arising from the minimum wage policy largely payable by the employers. With the rapid increase in the minimum wage, it boosts to the company to use more of the machinery and skilled labor. Then the employment opportunities for unskilled workers are becoming more and more limited, especially for women workers, young workers, and part-time workers.

The ninth demand is far beyond the “line of struggle” for the labors. They cannot expect the Government to permanently employ the teachers and temporary employee without more tests. Meanwhile, the current condition of our teachers, for example, is an advantage in disadvantages. That is, when looking at the ratio of teachers and students of elementary and junior high schools, Indonesia has improved from year to year. As the student and teacher ratio and number of primary schools and junior high schools teachers have reached 1:17 for primary schools and 1:15 for junior high schools. However, there is uneven distribution of teachers in rural areas and remote areas. This is what the government in the next 5 years should resolve. It is necessary to have strategic steps from the authorized Ministry, not a simple solution but “not measurable” that would cause more harm in the future.

In short, all the aspirations of the labors led to the urge on the role of government which will be more dominant over time. In fact, there are other important actors in our economic system that is often forgotten – for example, there is no special day for businessmen, whose minds and hands create creative innovations and the improvement of the welfare of the workers and other blue-collar workers. We need to focus more on them, not on the dominance of the government’s role as representatives of the state. I was reminded of a saying from a journalist and member of the French Parliament in the 19th century, Frederic Bastiat (1800-1840), who said “everyone wants to live, funded by the state. They (often) forget that the state gets the money from its people.” I believe in the Bastiat’s common sense, because the policy has always focused on what is seen (the state-funded life), rather than on what is invisible (the state gets the money from its people).

A website for freedom, that is the essence of Suara Kebebasan. This website’s main missions are promoting ideas of liberty and giving comprehensive understanding of freedom as well as free market in Indonesia.